Below you can read about typical race day weather, Myanmar's climate, and see the average weather conditions in Bagan/Mandalay and Yangon. 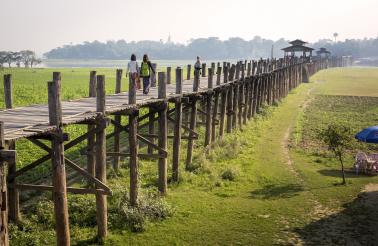 Myanmar has three easily recognizable seasons. November - February is a relatively cool, dry period. Around mid-February, the temperature begins to climb rapidly, peaking in May, and marking a hot, also relatively dry period. In June, the monsoons roll in, cooling down the temperatures and dumping overwhelming amounts of water.

The country contains several mountain ranges that run north-south, and in the middle of these mountain ranges is the central river valley. This large, densely populated plain belongs to the mighty Ayeyarwady River, along the shores of which both Bagan and Mandalay are located. Along the river, tobacco, peanuts, sugar cane, cotton, and rice are cultivated. The majority of the country has a humid subtropical climate, although the mountains provide rain shelter to the Ayeyarwady River Valley and hence it is much drier. Large parts of the country's hillsides are covered with teak tree plantations and vast forests with oak and rhododendron trees. Southward toward the coastline, the vegetation turns into jungle, where tigers, leopards, and gibbon monkeys reign. Yangon is located down south, at the delta of the Ayeyarwady on the Andaman sea.

See the average temperatures and precipitation per month below in the tables. 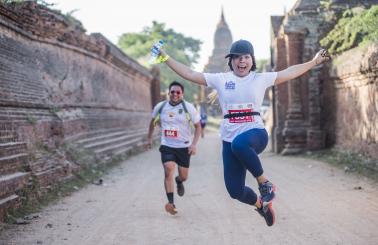 In November, the temperatures in Myanmar are cooling off. That is not say that the race will be cool - in fact, quite the contrary. Temperatures during the race generally hover around the 30s (Celsius) and the sun can be unforgiving. The race begins early in the morning to escape the brunt of the heat, but participants should still be prepared to sweat.

The Bagan Temple Marathon has been running since 2013, and has never seen rain on race day. Mid-November marks the beginning of the dry season in Myanmar, and hence chances of rain on race day are very slight. That said, of course it might still happen, and it is likely to be humid regardless of actual precipitation.